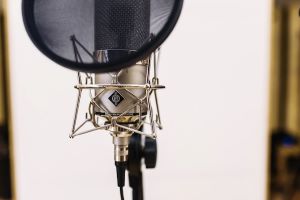 You’re already doing voiceover, and you love it. Like me, you may do narration—medical, corporate, in-show—or maybe even telephony voiceover, but you have your eye on the prize: commercial voiceover. In just 30 or 60 seconds, there’s a big story there, and the right voice can make all the difference in a commercial ad campaign. Oh, and if you’re good at booking commercial voiceover jobs, there’s usually a big paycheck for you if you book a national spot for a major corporation.

It’s good to have lofty goals in voiceover. When you see or hear that McDonald’s ad, or spots from Ford, Microsoft, GEICO, Verizon, or Subway, you think: “That should be me!” And you’re not alone because almost all voiceover artists think that should be them, too. So how do you stand apart from the rest?

Be strategic before you read that copy.

Your Demo Lays the Groundwork

You have to be ready. First, you must have a killer commercial demo, even though at the end of the day, you’ll usually book from auditions. Maybe you need more coaching, but the good news is that there’s no shortage of great commercial voiceover coaches or demo producers.

You’ll work with your coach to get your commercial style “just right,” and then you and that expert will decide on a list of spots to record on demo day. Ultimately, your coach will pick the takes from those spots that best illustrate what makes you a special commercial voiceover talent. As I’ve learned, it takes thoughtful planning and preparation, so you want to ensure you’re ready to shine on demo day.

Your commercial voiceover demo represents what you do well. It’s your audio “business card” when prospective clients want to hear how you sound—so they can imagine your sound with their script.

Some successful commercial voiceover artists learn to imagine someone else delivering the lines of the spot: a friend, a family member, or a celebrity, and they incorporate the probable reason that motivates the words to help them interpret the copy and deliver the read that’s right on target.

It’s true that celebrities sometimes book commercial voice over, but don’t let that dampen your enthusiasm. You may have heard Jon Hamm on Mercedes-Benz, Matt Damon on TD Ameritrade, John Goodman on Dunkin’ Donuts, or Tina Fey on Walgreens. Ask producers why celebs got those jobs, and you’ll likely be told that they sound “relatable,” “conversational,” “friendly,” or “trusted.”

Your voice is the only voice that sounds like you, and you, too, can find your niche and capitalize on “your” commercial sound. You sound within a certain age range, and that’s noted since producers are always cognizant of the target market for a product’s success.

Those Directions on the Voiceover Script

Big companies pay big agencies very well to develop the next great commercial. Agencies include copywriters, creative directors, and their teams, who have a certain sound or tone in mind when writing the words that can sell products. They also have personality characteristics in mind, often tied to the target demographic—those people an ad needs to reach.

When you first get a commercial script, the directions are specific, and you’ll be told what the client wants in terms of a “feel.” Here are some recent examples from a few commercial voice over scripts:

As you can see, some clients want you to pack a whole lot into your commercial voice over read! So, you’d better “bring it.”

Know the Types of Ads

There’s a lot to think about before delivering that all-important first take in the booth. It’s generally agreed that two major types of ads dominate commercials, and your goal is to make sure your read resonates with the target audience for each. Whatever the read, you must be versatile and able to punt while performing under direction during recording.

Brand ads: These have a consistent theme, causing the listener to respond with an emotion that connects to what’s being promoted or sold. You may not read an overt call to action, but you will read copy that reinforces what’s great about the product or service—a feeling. And that can translate to sales.

Event ads: The second most common category is event advertising, which is often directly tied to retail sales. This one comes with a marked sense of “hurry up,” as in “You’d better buy this now at this great, low price before it’s gone!” Are you familiar with the venerable four Ps of strategic marketing strategy? They’re the product, price, place, and promotion, and they figure heavily in event advertising.

Sure, the brand still places a role in the message delivery, but a strong message overrides any subtlety here.

Finally, no voice talent is an island. Pay attention to spots on TV, radio, and social media. Do you hear that casual and cool sound or something more formal and measured? Can you hear certain trendy cadences, breathiness, or texture? Those voices you hear on the “big boys” commercials? What’s special or unique about the read or the voice—surprisingly, that voice may not be so memorable, but the read may have grabbed your attention and didn’t let go. Success with commercial voiceover? You’ve got this. Just take time and care along the way.